I chose to conclude this episode of the POE6  Hunt with this absolutely stunning and very sexy bronze gown by Dainie Fraina of Artizana.

I like to end on a high and classy note.  If you have not gone hunting and picked up all these incredible gifts you still have a few days to make the magic happen.  DON’T be the ONLY kid on your SL block that does not look beautiful and cool and hip and aware and stylin’ this coming year.

I would also like to state that no elves or sock monkey’s were injured in the preparing of this blog despite of any indications to the contrary, or loud shrill screaming you might have heard coming from the general direction of my house.

That’s all folks.  Good night.  God Speed and have an awesome New Year . . . or don’t … I am trying to not be quite so bossy this year.

There’s still plenty of time to pick up those Peace on Earth Hunt (POE6) gifts, and with so many great stores in the hunt, you don’t want to miss a single one! My complete outfit is the POE6 hunt gift from ~*~Felicia’s Fashions~*~; included are the sweater, leggings, and boots you see here, plus a pair of mittens and a snuggly hat which I’m not wearing here.

More POE6 goodies for your landscaping needs! First, this awesome ice-skating shack is the gift from Hanaya. It dispenses animated ice skates for both men and women for your winter skating pleasure. The lovely tree on the right is the POE6 gift from *Kismet*; this is the “undecorated” version, but there is also a version with Christmas decorations in the box. The decorated stump on the left is the POE6 gift from HPMD (bear cub not included). There is also a larger version in the box with more lights and critters aboard – and it snows!

Horns are just so freaking versatile, like should any craft box be without them?

I keep mine between the glitter and the finger paints.  It goes Glitter, Horns, Finger Paint, Feathers, Buttons … etc ….
You can put them on your car, on your fence posts, in the barn, the wall of your office  . . . or wear them on your head.  You can’t do that with glitter.  It would look ridiculous to have glitter on the barn, not to mention how nervous it makes the cows and then they don’t let down their milk … just not going to happen.
I have to ask you seriously … is there another single blog here in SL that is a source of such a varied and important list of topics?  I mean think of all the ways I bless your life with the little tidbits of “must have” info I share.  Now you know why the cows never produced as much milk when your grand dad wore that bra with sequins under his overalls.  Mystery solved.

I paired my horns with LadyCatherine Fairey’s gown from Butterfly Effectz.  Wear it to the barn and the cows will be totally into anything.  Cows are big on horns.  You know what they say about big horns in the cow world.   What with their failing eyesight … wear the horn headpiece and the world becomes your dairy store oyster only not in the sea of course.  Trust me.  I know these things.
GOWN:   Butterfly Effectz for POE 6
POSES:  Dare (NLA)

POE6 ~ Dashing through the Hunt

Only 7 or so days remain in the POE6 Hunt.  Slurls for the items follow the photos.  But before we get to that, I just want to say it’s been a genuine honor and delight to be included as an official POE weblogger and to share even this very small sampling of the beautiful hunt finds.   Thank you to all the wonderful designers for creating such gorgeous pieces for this event.  And thank you, Sequoia, for creating the Peace on Earth Hunt 6 years ago now.  You run it so beautifully year over year — making not only a hunt, but SL’s largest grid-wide hunt yet, seem effortless every time when the reality is it simply must require a great deal of work and commitment.  POE is always an elegant, wonderful event, Sequoia…just like you.  Thank you.  And see you and everyone in this soon to be Happy New Year! 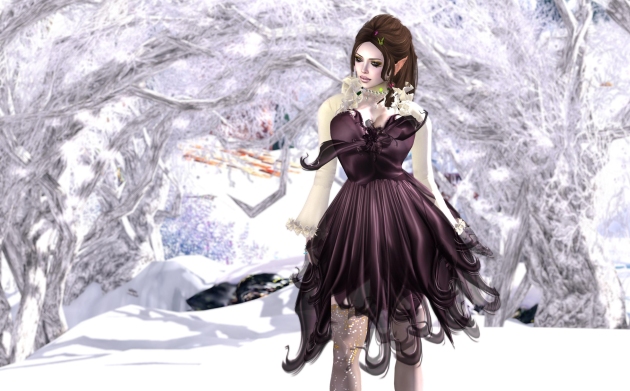 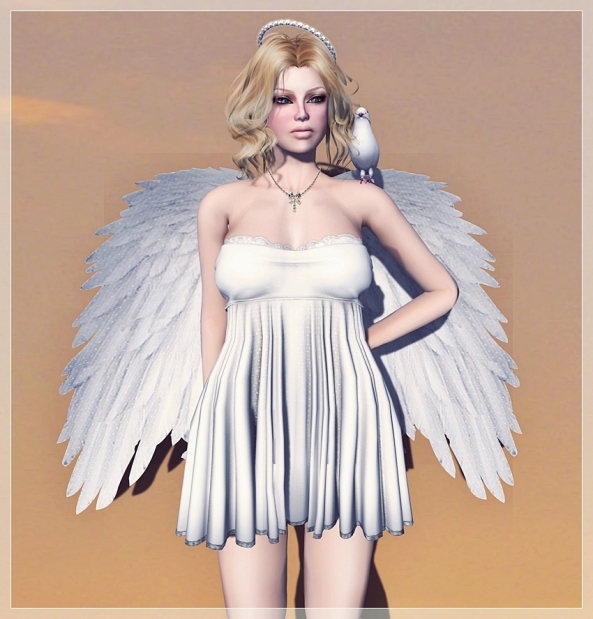 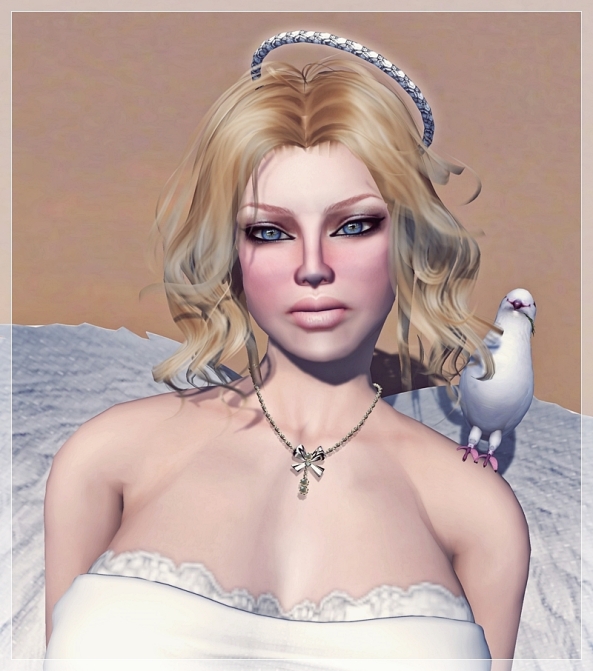 Ramses Meredith of Egoisme created this lovely imitation of a pepperminty candy cane for a dress for the season .. but I can tell you that licking it does not give you minty fresh breath.

Nando Korobase of Angel Dessous provides snowflakes and fur and sparkle and long gloves to put the magic into the night and sequins and ruffles from Lilly Juno of Immerse dance their way across your dreams.

I like to take a whole wardrobe when I go out so I can change costumes and play any role that happens to present itself.  I just think it makes the whole evening more fun and you can share your costumes!!

Ooyukichioo of IrodorI gifts us with this fabulous outfit that is absolutely gorgeous!  I feel like a painting when I walk around in it.

I so want one in real life.  I want to calmly walk into the garden and make all the neighbours jealous.  I know they would be jealous because that is how it all goes down in my head and whatever my head wants, it just goes with.  I mean like the lack of participation from the outside world is irrelevant.  Facts are irrelevant  . . .

Thus is the power of the kimono and my mind … like super hero status on voluminous beautiful materialed steroids . . .
HAIR and OUTFIT:  –IrodorI– Harmony for POE 6 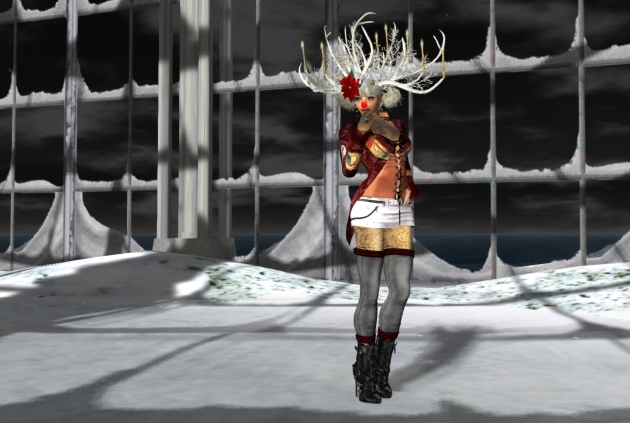 You should never assume that people aren’t paying attention.

I put on this beautiful gown from Reign Congrejo of Evolve and my mother in law passed by the computer and asked “Where is your girlie’s boyfriend?”
“What boyfriend?”
“The little guy with the ears?”
“That was an elf.”
“Looked more like a monkey to me.”
“Well yes, I was using an elf, and then a sock monkey elf, and then a guy .. it was just a kind of something to write about for all these POE posts.”
“I wasn’t judging you, each to their own.  Just because I would never date a sock, or an elf, doesn’t mean that you can’t.  I mean we don’t always have much choice do we?”
And she patted my arm and shuffled off to watch TV.

I heard her on the phone later telling my sister in law that I was dating a sock monkey but  . . . it didn’t work out.  She was trying to verify if that was some sign that I needed to be committed.
DRESS:  EVOLVE for POE 6

Ladies in white … I love starting with blank canvas and I always think white kinda disarms people and they let their guard down a bit.  I mean you can’t just misbehave in a vacuum .. where is the fun in that???

Sira Savira or 1Hundred, Pixivore Allen of AlaFolie and Shinichi Mathy of Shiki have all offered virginal deflectors for the holiday season.  Aya Mactavish gifted us with a cool butterfly typer that puts butterflies dancing all around you whenever you type.  I am thinking this would be so cool in real life.  Imagine having to deliver bad news to someone and as you speak there are butterflies everywhere to help soften the blow.  I mean Snow White was always pretty happy and she had butterflies around her all the time.  I think that is a given, have butterflies and everything seems better … although if you were in love with a caterpillar and then came to see them one day and they were gone with all their butterfly friends and left you without any word that would kinda suck.  THAT person would not probably appreciate a butterfly typer … but the rest will. 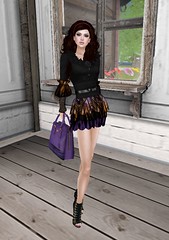 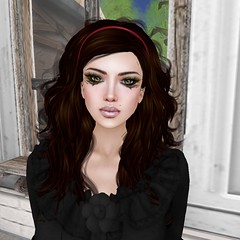 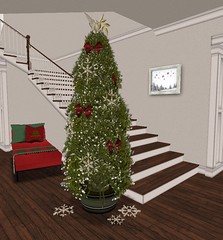 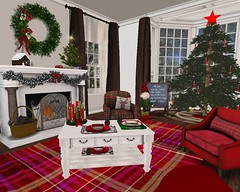